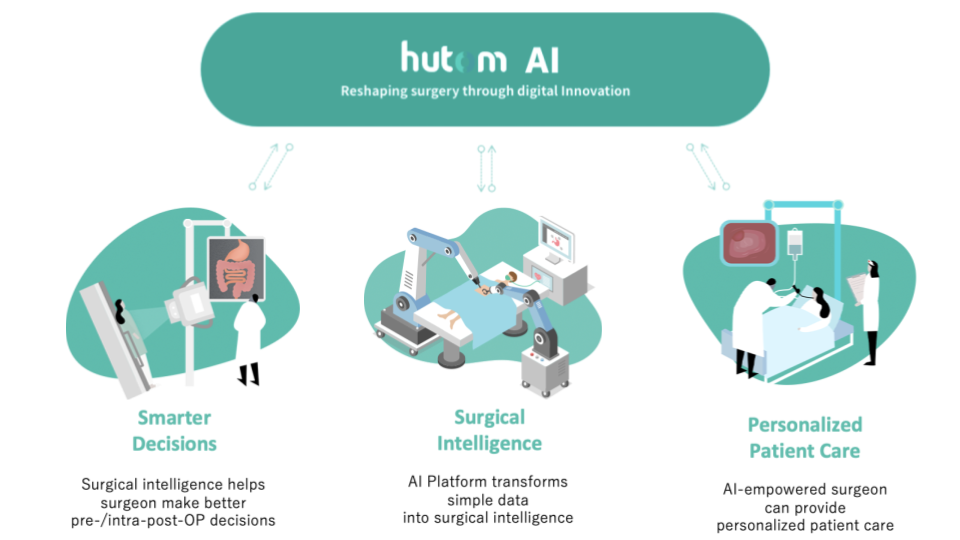 Official repository for the paper hSDB-instrument: Instrument Localization Database for Laparoscopic and Robotic Surgeries. This project was developed at hutom.

hSDB-instrument dataset is a new dataset that reflects the kinematic characteristics of surgical instruments for automated surgical tool recognition of surgical videos. The hSDB-instrument dataset consists of instruments information of cholecystectomy videos obtained from 24 cases of laparoscopic surgery and gastrectomy video obtained from 24 cases of robotic surgery for gastric cancer. Localization information for all tools is provided in the form of a bounding box for training using the object detection framework. At the same time, to handle class imbalance problem between tools, synthetic tools modeled in Unity for three-dimensional (3D) models are included as training data. In addition, we provide object detection models and their baseline performance trained on the hSDB-instrument dataset through MMDetection library.

Table 1. The number of frames by surgery types and data split for the hSDB-instrument dataset. The additional frames of synthetic and domain randomization data are highlighted in bold.

Table 2. The number of labels by instrument subpart for the hSDB-instrument dataset. Synthetic and domain randomization data were added equally to each imbalanced class and the classes are highlighted in bold. 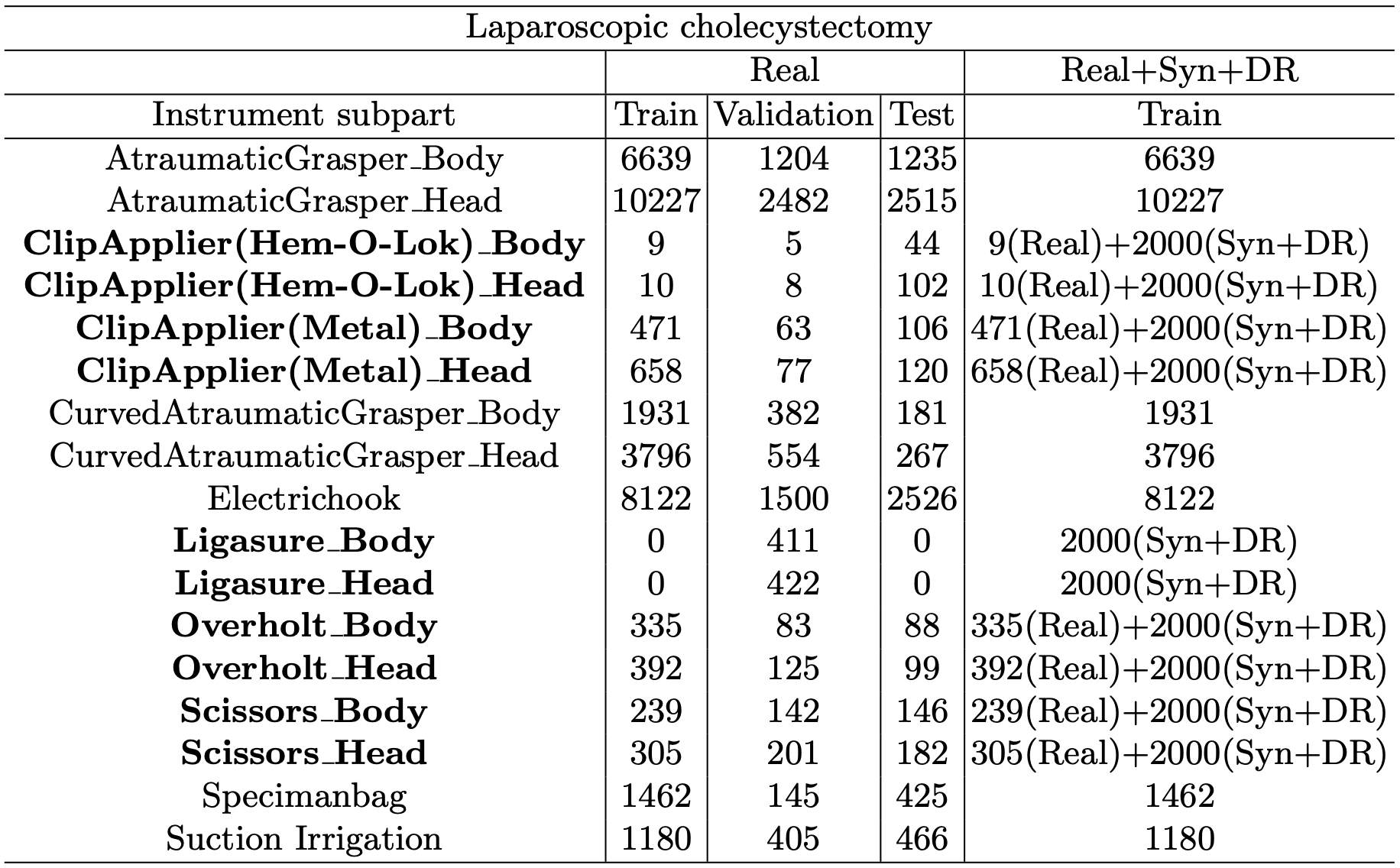 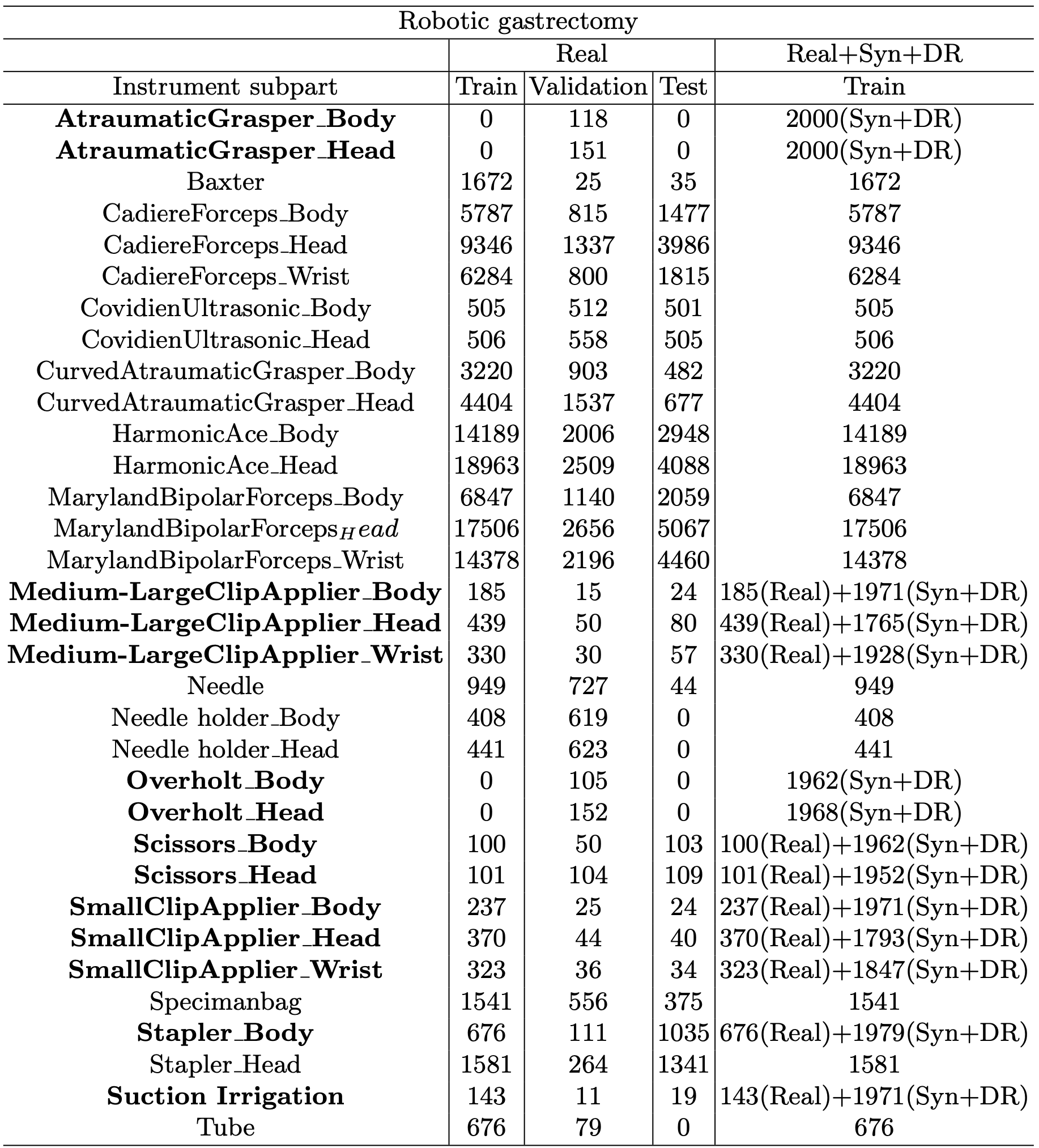 Figure 1 shows the relative amount of annotations of the subparts with the largest number of the subpart to 1.0 in laparoscopic cholecystectomy. Figure 1 compares the relative amount of the normalized number of supervision. The graph at the top is the statistic for the real dataset, and the graph at the bottom is the statistic for the real, synthetic (Syn), and domain randomization (DR) dataset. Figure 2 shows the same statistics as in Figure 1 in gastrectomy for gastric cancer. 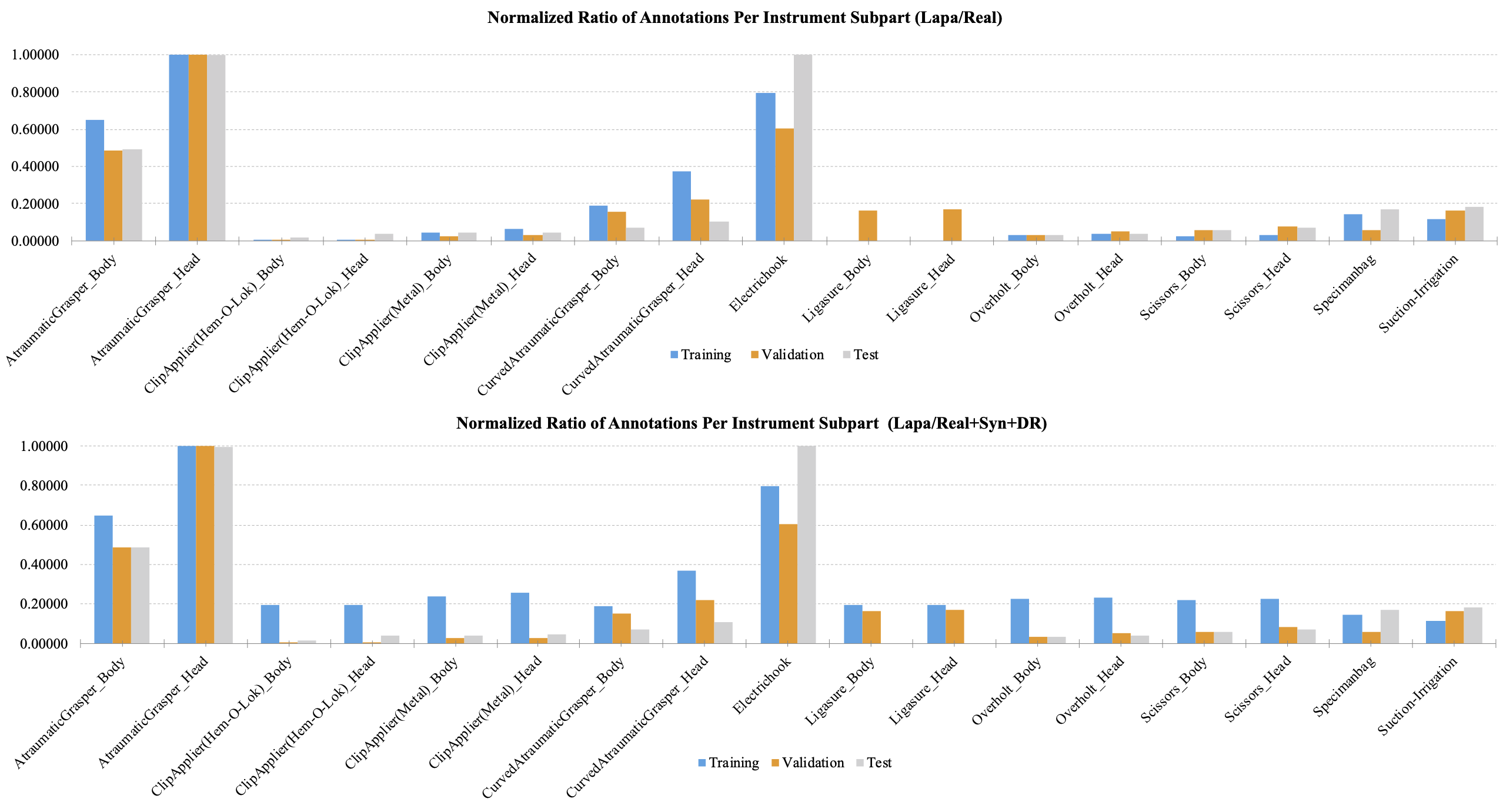 Figure 1. The relative amount of annotation for each subpart of the tools used for laparoscopic cholecystectomy. The largest number of annotations were normalized to 1.0. 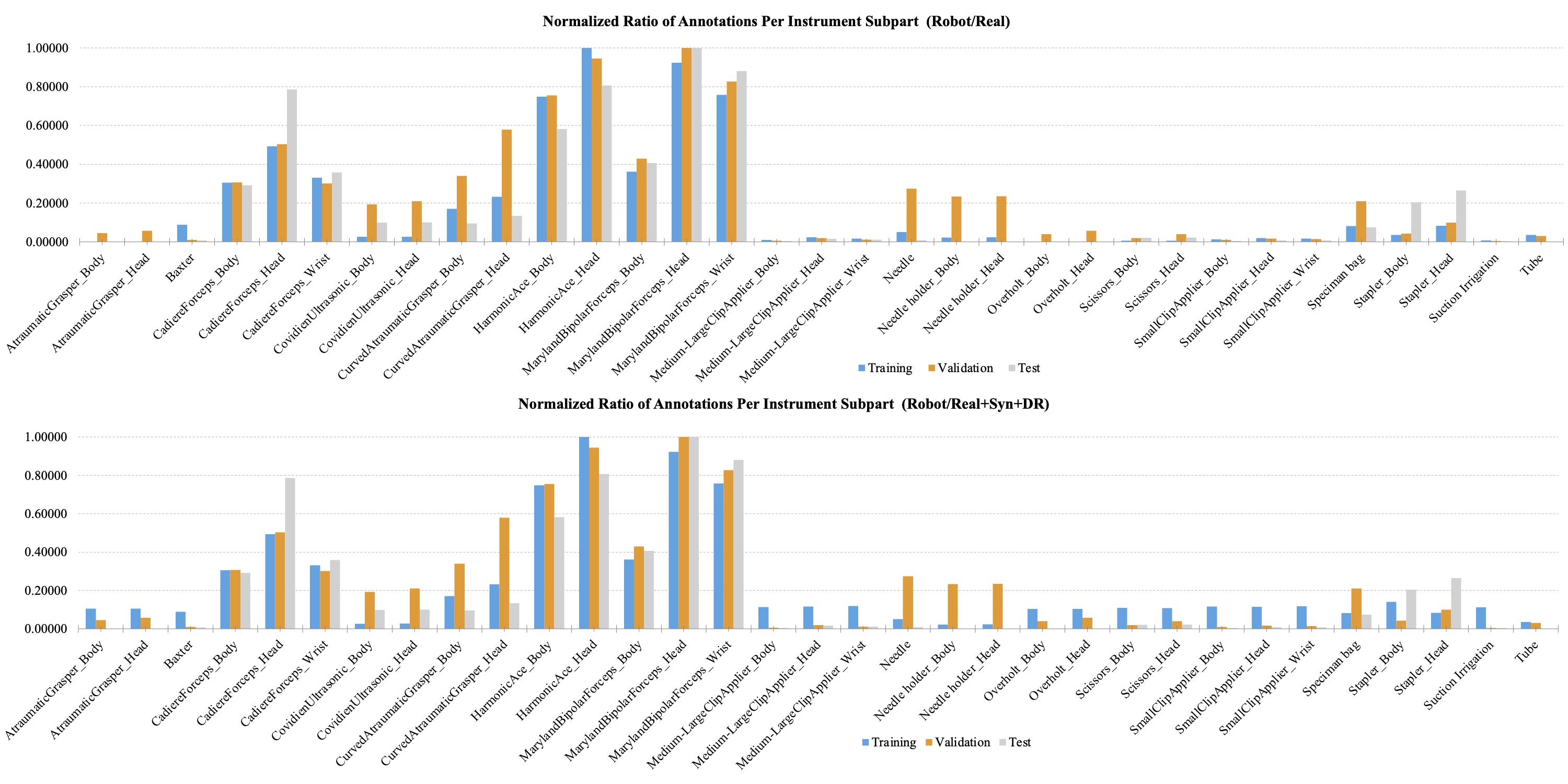 Figure 2. The relative amount of annotation for each subpart of the tools used for robotic gastrectomy. The largest number of annotations were normalized to 1.0.

Figures 3 and 4 show the number of annotations of the tools on a logarithmic scale. In figure 3, the tools that appear in laparoscopic cholecystectomy are largely divided into laparoscopic head, laparoscopic body, laparoscopic instrument tools, and auxiliary tools. Laparoscopic instrument tools are referred to as equipment such as suction-irrigation and electrichook that are not divided into subparts. Auxiliary tools are assistive tools, such as needle and specimen bag. The graph on the right is a statistic including the synthetic (Syn) and domain randomization (DR) dataset. The same manner is applied for robotic gastrectomy in figure 4. Figure 5 shows the proportion of annotations by the categories defined in Figure 3 and 4. Figure 6 also shows the proportion of annotations by the same categories including both laparoscopic and robotic instruments.

Figure 3. The number of annotations by instrument category for laparoscopic cholecystectomy. The graph was plotted in a logarithmic scale.

Figure 4. The number of annotations by instrument category for robotic gastrectomy. The graph was plotted in a logarithmic scale.

Figure 5. Proportion of annotations by instrument category for laparoscopic cholecystectomy.

Figure 6. Proportion of annotations by instrument category for robotic gastrectomy.

Table 3 shows the performance evaluation results of the most improved model (RetinaNet+ResNet50+FPN+align-gn-ms) by adding Syn+DR in both surgery types (laparoscopic cholecystectomy and robotic gastrectomy) and best models (FoveaBox+ResNeXt101+FPN+align-gn-ms) in each surgery type. Imbalanced classes are highlighted in bold. Most of the performances in mAP were improved with our synthetic and domain randomization dataset in both surgeries. The most improved model (RetinaNet+ResNet50+FPN+align-gn-ms) was improved significantly, more than 0.2 mAP in many classes and the highest improvement was 0.487 in mAP of the SmallClipApplier_Wrist in test set. Cascade R-CNN and FoveaBox were improved more than 0.1 mAP in each Overholt class and Medium-LargeClipApplier class which are both imbalanced classes. 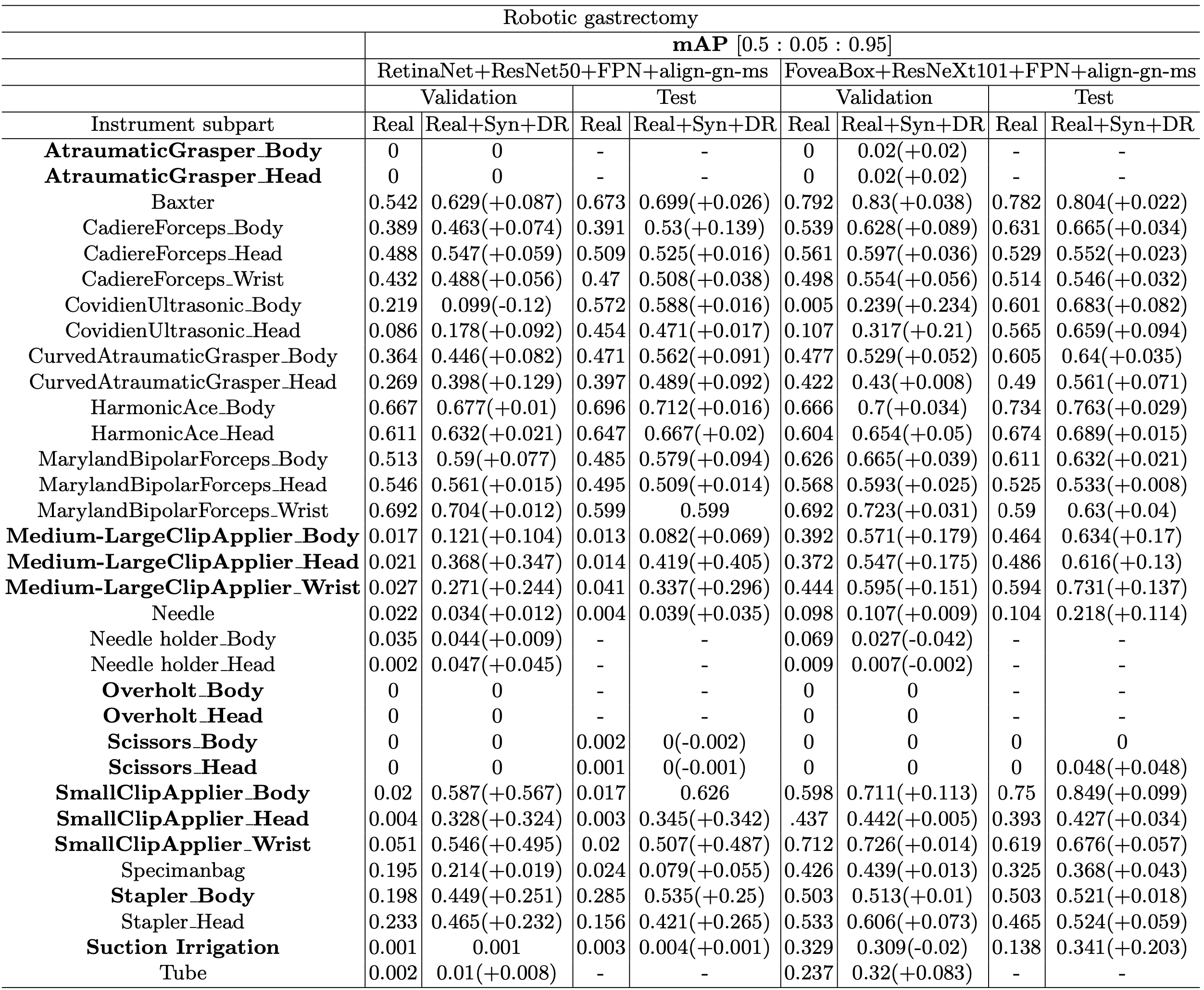 Figures 7 and 8 show visualizations of the tool position measurement for the different model and dataset. The probability threshold for visualization was set to 0.7. Figures 9 and 10 show the learning curve using the hSDB-instrument dataset. Figure 9 shows the total loss during training for each surgical type, model, and training set. Figure 10 shows the mAP for the validation set measured at each epoch according to the surgical type, model, and training set. 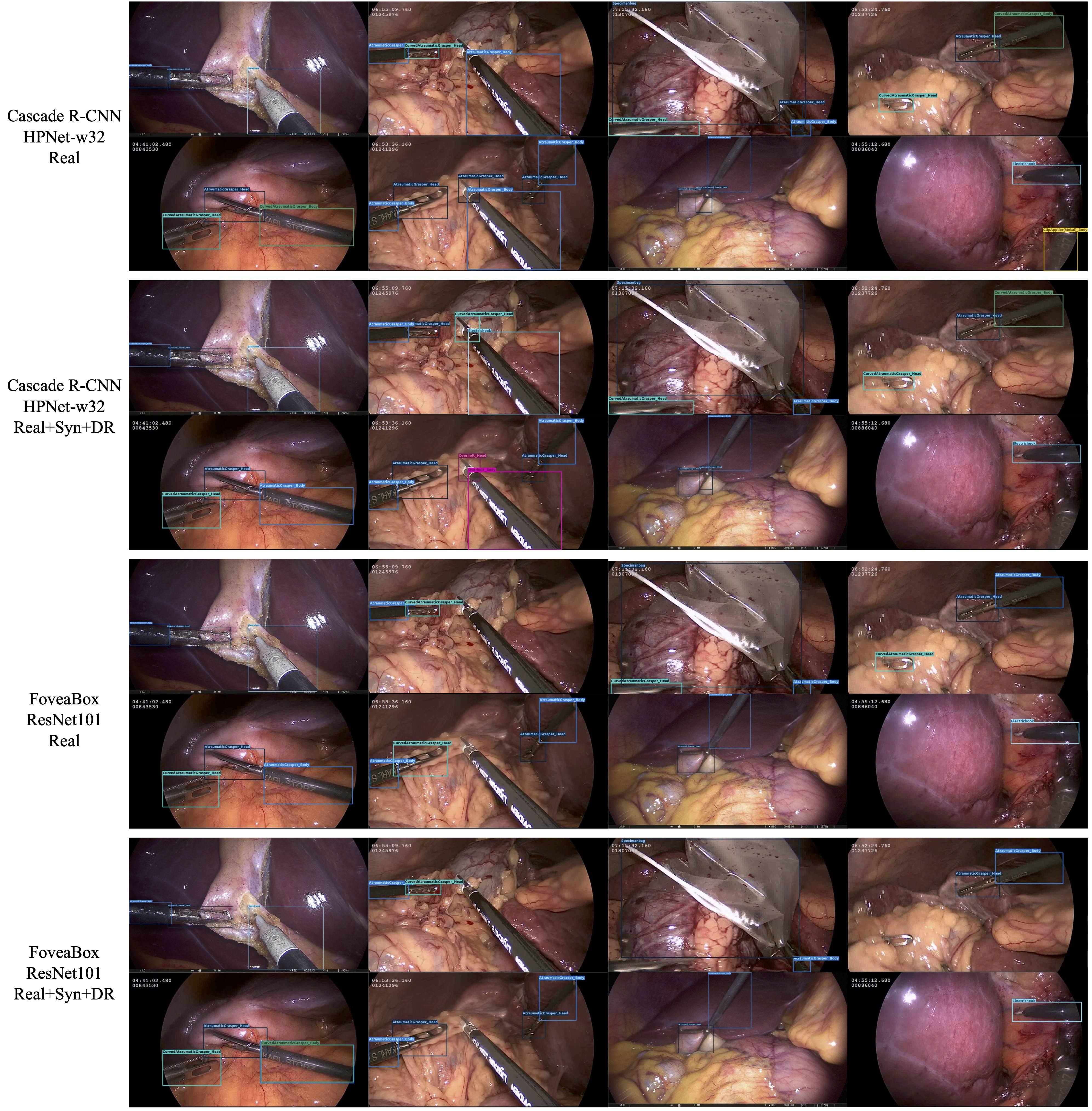 Figure 7. Visualization of MMDetection-based inference output for laparoscopic cholecystectomy. For each video frame, it shows the output of the trained model with different architecture and composition of dataset. The confidence threshold for visualization was set at 0.7. 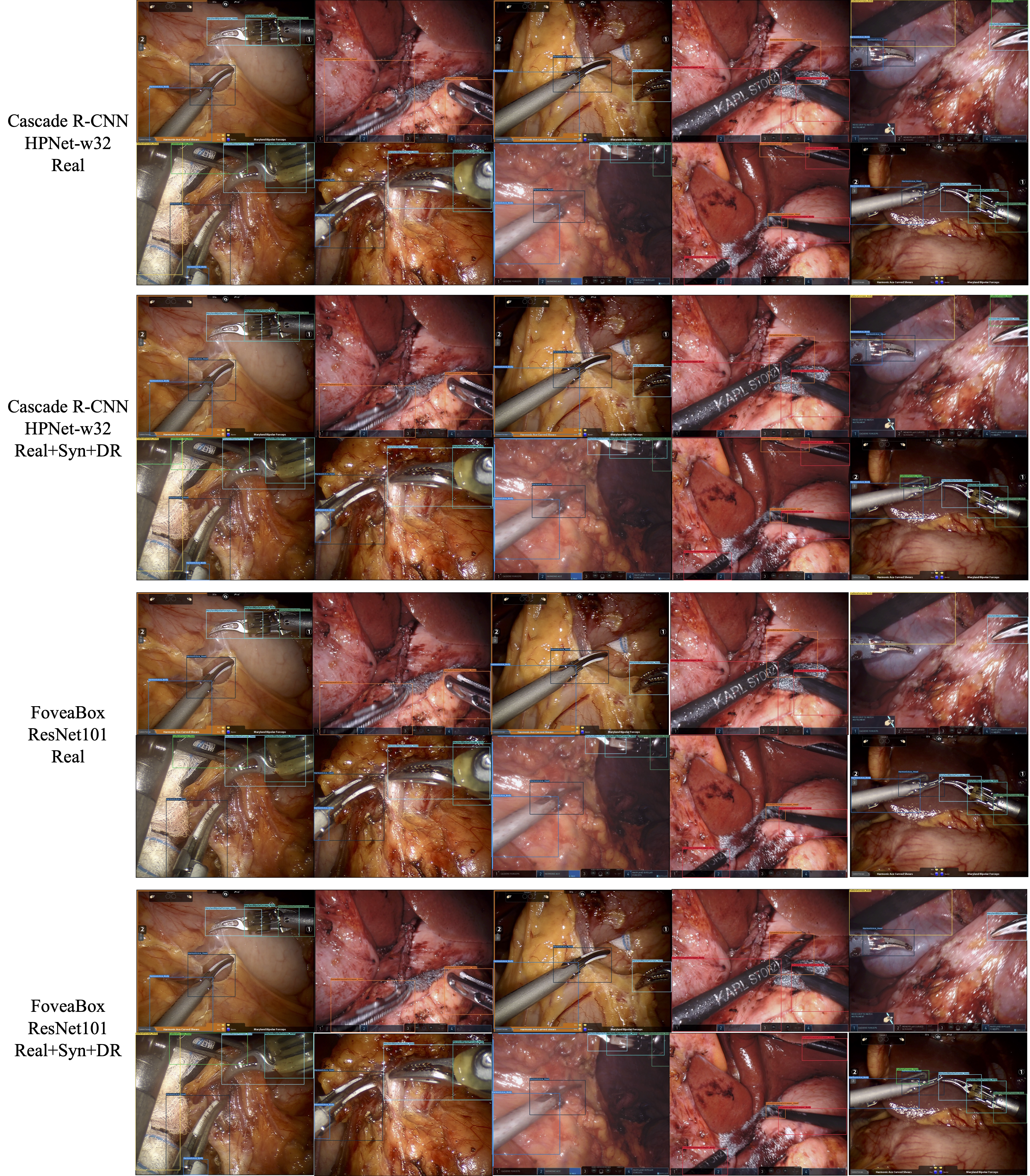 Figure 8. Visualization of MMDetection-based inference output for robotic gastrectomy. For each video frame, it shows the output of the trained model with different architecture and composition of dataset. The confidence threshold for visualization was set at 0.7. 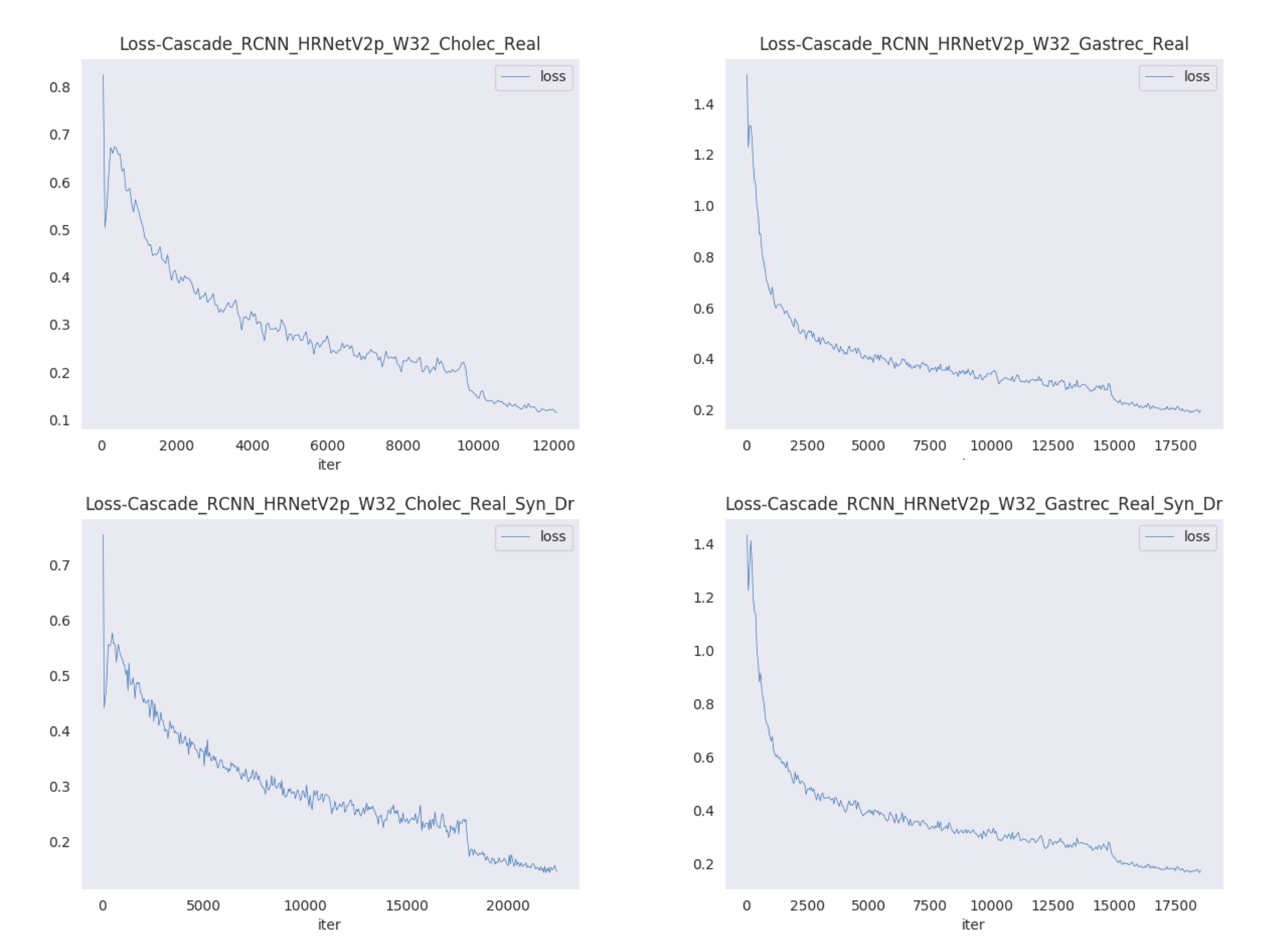 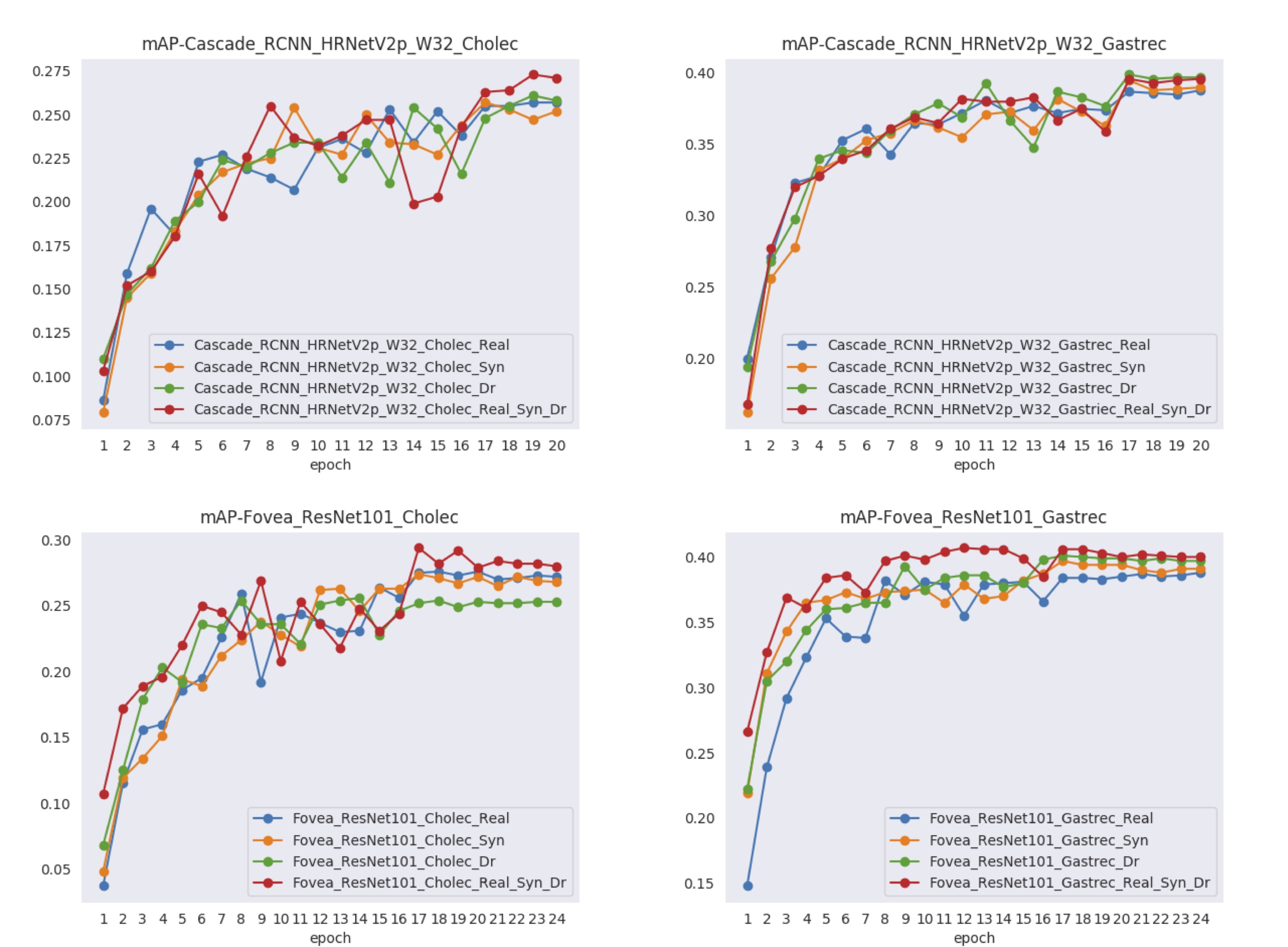 Figure 10. Learning performance curve according to model in training using hSDB-instrument dataset. The training for each surgical type, model, and training set shows the mAP at each epoch.

More models with different backbones will be added to the model zoo (scroll right following table to download models).

We used MMdetection library(v1.1.0) to train object detection models on the hSDB-instrument dataset. Following instruction is based on the official MMdetection documentation.

You can use the following commands to test sample images.

Assume that you have already downloaded the checkpoint and config file to the directory hsdb_demo/checkpoints_configs/.